The History of Excite.com

In 1995, Excite was launched as a web portal. The portal offered a wide range of different types of content including:

The public search engine originated as the Architext project in February of 1993. Six Stanford undergraduates used word relationship statistical analysis to ensure internet searches were more efficient. By the middle of 1993, the project received full funding. The undergraduates then released the search software to webmasters for use on their websites. Eventually, the software was named Excite for Web Servers.

The original Excite was founded in 1994, but the company did not go public for two years . During the 1990s, Excite became the most recognizable internet brand. In 1997, the Excite.com portal was the sixth most visited. By 2000, Excite was in fourth place. A merger occurred between the Home Network broadband provider and Excire, but in 2001 the company declared bankruptcy. The Excite services and portal were acquired by iWon.com and Ask Jeeves. Shortly afterward, the popularity of the portal declined.  Excite was originally created by Martin Renfried, Ben Lutch, Ryan McIntyre, Mark VanHaren, Joe Kraus and Graham Spencer at a garage located in Cupertino, California . These Standford students intended to create software capable of managing the information available through the internet. The students received $80,000 from the International Data Group in July of 1994 for the development of an online service.

The initial backing for the project was arranged by a former student of Stanford, Vinod Khosla. The $250,000 was possible because he was a partner at Kleiner Perkins Caufield & Byers, a venture capital firm. During the next 10 months, the company received an additional $1.5 million. The formal launch of Excite took place in October of 1995. George Bell was appointed the CEO of Excel in January of 1996. The WebCrawler and Magellan search engines were then purchased by the company.

Excite signed exclusive agreements for distribution with several companies including Apple, Microsoft and Netscape. In 1994, Jim Bellows was hired by Excel at the age of 72 to determine how the content could be presented in a journalistic manner. He began by hiring journalists to write short website reviews. The partnership ended in 1998 because the users skipped the reviews and went right to the content. The original website for Excel was mainly orange but was changed to the current black and yellow.

Excite went public on April 4th of 1996 with two million shares as the initial offering. Yahoo overshadowed Excel by going public at this time. Excite became the exclusive directory and search service for AOL or America Online in November of 1996 in return for selling WebCrawler and a 20 percent Excite share. A 19 percent stake was purchased by Intuit in June of 1997. Intuit is the creator of TurboTax and Quicken. A partnership deal for seven years was finalized.

A comparison shopping agent called Netbot was purchased by Excite on October 16th of 1997. Intuit simultaneously announced the Excite Business & Investing launch. Later in the year, Excite finalized a deal with Ticketmaster for direct ticketing online. A loss was reported on March 31st of 1998 for roughly $30.2 million by Excite. The first-quarter report showed obligations could only be met through December due to this loss.

Content for the Excite portal was derived from more than 100 sources. Excite was also the first to begin providing free email. As rivals, Lycos and Yahoo! followed shortly. According to a press release from November of 1997, approximately 11.8 million people visited the network between September and October. Negotiations with Yahoo! to purchase Excite began in December of 1998 for between $5.5 and $6 billion. On December 19th, George Bell met with Thomas Jermolek.

Excite was purchased by @Home Network on January 19th of 1999.  During this time, Excite was the sixth biggest online portal according to traffic . Although it never happened, Microsoft became interested in merging with Excite to form the MSN.com portal. Later that year, Justin Rohlirch wrote that Larry Page and Sergey Brin felt developing Google required too much time away from their studies. They then offered George Bell the company for $1 million but their offer was rejected.

Vinod Khosla was a venture capitalist at Excite and negotiated a deal for $750,000. When the offer negotiated with Larry Page and Sergey Brin was refused, he threw George Bell out of his office. Rohrlich labeled the refusal to purchase what would become a $900 billion company a stupid business decision. George Bell claimed on both CNBC and a 2014 podcast the reason the deal never happened was that Larry Page wanted to use Google search technologies and he did not agree.

What Happened to Excite.com 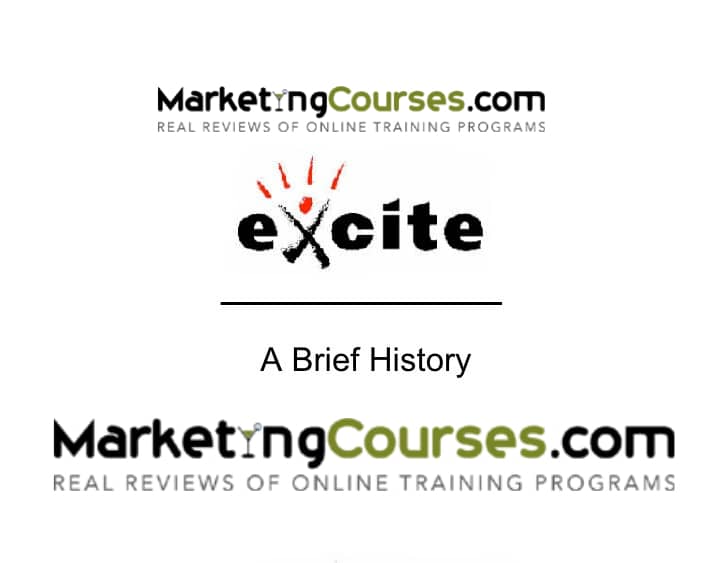 A lot of people were left wondering what happened to Excite.com. The company began as a prominent search tool only to become one of the minor players. In 1995, Excite offered search engines based on crawler technology with spiders used for building a searchable index and recording websites. During this time, Infoseek, WebCrawler, Lycos and AltaVista were also popular. By 1996, Excite was showing excellent growth. By the 1990s, Excite was considered to be in a strong market position.

This was when partnerships were established with Netscape and MSN for the provision of search services. The main Excite site in addition to the international versions provided a variety of services in addition to search.  Due to the 1998 launch of Google, established search platforms began losing traffic . The 1999 merger with @home did not stop the downward slide. Even though Excite@Home was a top ISP in the United States, the company was facing significant debts.

Google, AltaVista, FAST and Inktomi quickly surpassed the Excite search index. Once Excite@Home filed bankruptcy, the company was broken up due to AT&T taking over the services. Ask purchased the Excite portal in March of 2004 in addition to taking over operations in Europe. Ask received ownership of every portal and domain for different countries throughout Europe. The Excite brand is still in existence. Portal services are available in:

A metasearch tool provides search results in the United States with results from natural search tools such as Yahoo and Google and pay-per-click. Results for the United Kingdom version are generated through Ask. Directory results are provided using the Open Directory.

Excite.com email offers free voice mail. The email services can be customized according to the preferences of the user. Each account provides a 125 MB storage capacity. This means users can store approximately 10,000 messages. The storage summary page enables users to determine how much storage remains. Storage capacity can be checked through mail preference or the Inbox hub. The following features are available.

Excite provides users with 250 to 1,000 MB of email storage. This is more than enough space to allow for new messages before larger emails are deleted.

The most recent attachment limit is 10 to 25 MB to enable users to attach large files or documents.

Contacts can be read and browsed using any email tab.

Extra storage space is available to upload important documents to the user’s account.

There are four frequently reported issues with Excite email:

Excite email is accessible through Outlook by following the steps below:

Excite.com acquired by Ask Jeeves for $343 million in stock and cash in 2005. Ask Jeeves believed this acquisition would result in an immediate increase in revenue and earnings for the year. The company is capable of doubling the search queries handled by the company. The idea was to increase the desirability of Ask Jeeves to the online advertising community while offering an alternative to Yahoo and Google. Ask Jeeves is based in Emeryville, California.

To complete the acquisition, Ask Jeeves issued $150 million and 9.3 million stock shares. When specific targets are met, Ask Jeeves must pay an additional $17 million. This means the deal will be worth approximately $360 million. As the CEO of Ask Jeeves, Steve Berkowitz stated the acquisition was important for the growth strategy of the company. He believed leveraging the search capabilities would accelerate the market share of the company.

Several different web businesses and brands were operated by Interactive including My Search, iWon, MaxOnline, My Way, My Web Search and Excite . These sites encompassed the Excite Network and ranked among the top 10 for all of the web properties. During the last quarter of 2003, approximately 700 million searches were conducted through these sites. The acquisition of Excite was backed by the investors. The result was a 38 percent or $7.90 increase of Ask Jeeves’ stock.

The analysts believed even if Ask Jeeves managed to double the search base, the company might still lose the war it was fighting with Google. At this time, Google was close to an IPO providing hundreds of million to solidify the position of the company. This was also when Yahoo was rejuvenated. Yahoo began using its own technology as a search provider and dropped Google. A lot of technology was acquired due to takeovers. The rumor was a search market splash was being planned by Microsoft.

As an analyst for NetRatings and Nielson, Jason Levin made a statement. He said Ask Jeeves would stay in fourth place for his company’s recent ranking results. This placed Excite behind Google, Yahoo, AOL and MSN Search. In a statement Jason Levin made to the E-Commerce Times, he said surfers are using search engines continuously and in large numbers. He believed this expanded the opportunities available for all companies.

He added that searchers are using multiple sites and generally return to the sites offering the most relevant results. The majority of web users including shoppers are looking for something specific. This means navigation is reliant on search capabilities. As an analyst for the Yankee Group, Rob Lancaster expressed his agreement. He said the marketplace had enough room for Ask Jeeves since the relationship between search engines and web users are rarely exclusive.

Rob Lancaster further stated the reason for all of the consolidation is consumers believe the combination of traffic and technology will be the winner. Advertisers are attracted to a variety of online properties. Numerous types of sites were available including basic pages for search only including MyWay.com and the iWon.com portal offering the ability to win prizes and cash for registered users every time they visit the site.

In order for Ask Jeeves to acquire Excite, the company placed itself in the position of selling its search engine. The strong sales and profit return for 2003 was also an important factor. Ask Jeeves stated even if the Interactive purchase had not occurred, the company was on track for not only the current quarter, but also the remainder of 2004. There was a lot of concern among the search engines when Ask Jeeves announced the company would be terminating one of the paid-inclusion programs due to rankings and results.

Paid inclusion became a popular topic once Yahoo announced the company intended to increase the number of paid listings offered through its searches through an expansion of the paid listings roster. Yahoo also said all listings would be updated on a regular basis. Certain analysts believed the move to paid-inclusion by Yahoo would result in a short-term revenue windfall. Google was one of the companies in disagreement due to concerns the search engines credibility could be damaged by paid listings.